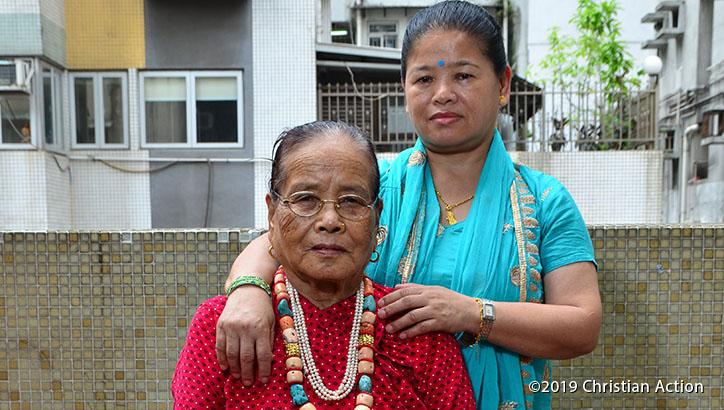 “In the past when we wanted to buy vegetables in the market, we would always encounter mean and unfriendly grocers. If we touched the veggies when making a selection, the grocer would force us to buy.”

- Bashubba and Bibi shared their experience

Bashubba and her daughter Bibi are members of the Gurung tribe from Nepal. As Bashubba’s husband was once a Gurkha soldier stationed in Hong Kong, they were eligible to obtain Hong Kong Identity Cards and resettle here before the end of British rule in 1997.

It wasn’t easy starting life in a new city; the language barrier and cultural differences created challenges in their day-to-day lives. “Hongkongers didn’t know much about Nepalese before. As such, it was difficult to find a job; sometimes landlords refused to rent out homes to us.” Despite these challenges, Bashubba didn’t give up, and she eventually landed a job as a cleaner. Unfortunately, she was hit by a car while working in 2003 and was unable to return to work due to persistent headaches.

After the accident, Bashubba’s life was thrown into disarray, but by chance she learned about Christian Action. With our assistance, she was able to receive compensation for the injuries from the traffic accident and support for her and her daughter. As far as Bibi is concerned, the most important thing was inclusion and acceptance. “We can dance and sing freely here. They treat us with love.” Subsequently, Bashubba helped set up a group for seniors at Christian Action to unite the Nepalese community and fight for equal treatment for ethnic minorities.

“We want to thank Christian Action for supporting us. Our life is getting better, and we really like Hong Kong.” As the saying goes, after the rain, the sun will shine. And Bashubba, who is a serious person, now finally shows a big smile on her face.