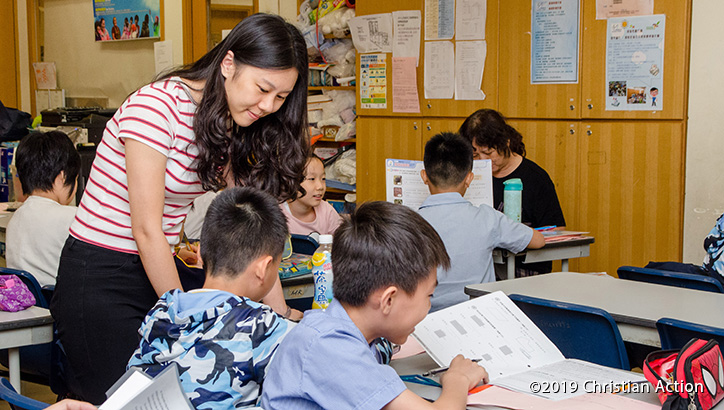 “New immigrants are not necessarily traders or visitors whose bags roll across your feet. Some of them are nice and hardworking.”

“I grew up watching Hong Kong TV shows; I was particularly attracted to the lifestyle espoused by office ladies in the shows. I felt Hong Kong was a vibrant metropolis!” said Ng Wing-yue (Ah Yue), originally from Taishan, Guangdong. Ah Yue’s father was a Hongkonger but passed away when she was 3 years old. At 10 years old, Ah Yue resettled in Hong Kong with her mother, and it was a rude awakening. “After arriving, I came to realise that Hong Kong life as depicted in the shows was far from reality.”

The gap between ideals and reality
It was mid-summer in 2004, and Ah Yue and her mother were living in a small room rented out by a family of four. The feeling of living under another’s roof caused her to remain isolated in the room. During that period of time, she was essentially living on cup noodles. A year later, Ah Yue and her family moved to a sub-divided flat in Mong Kok, where there was a bunk bed, table, television, and a kitchen. “At the very least, there was a bit of privacy!” she said.

Ah Yue’s mother worked in the frozen meat industry; the income she earned barely made ends meet. As such, Ah Yue’s only entertainment was reading in her tiny home, imagining endless possibilities through words. “It trained my imagination and made my life feel less boring”, she remembers.

I live my life with my head held high
While Ah Yue was able to stay happy through tough times, she also experienced loss and confusion. When she arrived in Hong Kong, she had to repeat Primary 4. After a few years, she still fell behind in her English class, and this affected her self-confidence. Nevertheless, Ah Yue’s immigrant status didn’t cause too much of a psychological burden for her, due to the support and belonging she got from Christian Action.

She first found Christian Action’s Mong Kok Service Centre through a friendly referral to her mother. When Ah Yue first came to the centre, it was summer holiday. She would arrive first thing in the morning at 8am and participate in all of the activities. She also made many friends in a short amount of time, which in turn helped her adjust to life in Hong Kong. “The words ‘new immigrant’ are not branded on my forehead; I have to change my mentality. Only rude behaviour should give people an excuse to discriminate against you”, she said. This period of happiness made a lasting impact on Ah Yue, and she continued to participate in the centre’s after school care service. Today, she is a part-time staff member at Christian Action.

My life in Hong Kong is the colour aqua.
From a dream to harsh reality, Ah Yue never regretted coming to Hong Kong. She continued to work hard and push forward. Ah Yue is presently a fourth-year student at the Education University and is majoring in visual arts, hoping to one day work as a museum curator on the mainland.

She compares her life in Hong Kong over the past 10 years to the colour aqua. “Aqua is a colour with layers; the deep blue represents gloom and anxiety. Yet the blue on the water’s surface is clear and transparent. Right now, I am trying hard to swim from the bottom to the top.”

There is light at the end of the tunnel; this is Ah Yue’s conviction.